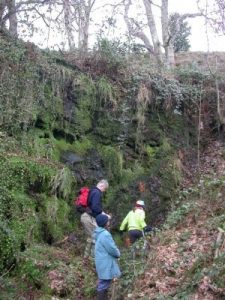 What a wonderful name! The story is that a woman called Dolly, who lived in one of the cottages above the waterfall, got into financial difficulties, but the ending of her sad story is not known. The falls were a Victorian spectacle and Sunday day trippers used the halt on the Huddersfield to Meltham railway line to picnic and enjoy the scenery of the little valley. The trees have grown up around the falls now, so they cannot be seen from the disused line. However, it is possible to walk from the centre of Meltham, about half a mile along the Meltham Greenway to the east, to see the waterfall. Access is a little difficult, involving a descent down steep steps and then a short walk up the stream (Wellington boots are essential). The falls are always lovely and it is a peaceful and interesting geological site to visit. Theland is privately owned but the owners are happy for responsible adults to look at the waterfall and the geology. Care should be taken, especially if the water level in the stream is high. Folly Dolly Falls gives an excellent view, in three dimensions, of a fault. The change of rock type from less resistant shale to the stronger beds of sandstone has been exploited by the stream to form the waterfall, which cascades across the sandstone fault plane, down joints and along bedding places. There is some reddening of the sandstone by iron-rich minerals, which have been able to follow the line of weakness along the fault plane and stain the surrounding rocks.

The position of the fault is marked by a gully which runs across the front of the waterfall. The soft shale was fragmented and shattered, as the sandstone moved violently against it during fault movements. A soft clay called gouge, which has been weathered more than the resistant sandstone, forms the gully. There are very few places in West Yorkshire where beds dip at steep angles and they are nearly always associated with fault movements, as in this case. As the shale moved down relative to the sandstone, it was affected by friction with the sandstone and dragged downwards, forming the concave curve shown above.