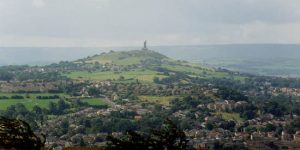 The West Yorkshire Geology Trust produced a leaflet in 2006 for the area of Castle Hill, which is such a prominent feature of the Huddersfield landscape. The site is an Iron Age hill-fort on which was built a tower to commemorate Queen Victoria’s jubilee. Victoria Tower commands wonderful views towards the Millstone Grit of the Pennines in the west, the Coal Measure landscapes in the east and, with good visibility, the hills of the Yorkshire Dales, beyond Keighley and Bradford. The geology of the hill consists of the Carboniferous Lower Coal Measure rocks, with the Millstone Grit Rough Rock lying below in Berry Brow. There are very few exposures of rock on Castle Hill, merely patches of scree on steeply sloping fields, so the aspects of Castle Hill that will be of interest to non-geologists are the features of the dramatic landscapes that surround the area. Five coal seams lie within the shales of the lower slopes of Castle Hill, including the Soft Bed and the Hard Bed coals, both of which have been extensively worked along the hillside, by adits and shafts. Workings are visible in several places on the hillsides, and there is also evidence of old quarries, now in-filled, which provided good building stone for the weaver’s cottages in the many hamlets, which ring the hill.

The West Yorkshire Geology Trust produced a leaflet based on walker’s trails around the hill using footpaths, many of which have an ancient history dating back over several thousand years. The leaflet includes stories about how the local rocks were exploited for stone and coal, as well as geological information on how the rocks of the Carboniferous period (310 million years ago) were produced in extensive deltas at a time when the continental area was drifting across the equator. More knowledge of the environmental conditions at the time and detail about the individual rocks has been established during the recent remapping by the British Geological Survey. The leaflet also looks at how erosion and weathering during and after the Ice Age created the shape of the hill by the action of melt water from ice sheets and freeze-thaw weathering in very cold conditions during the last 20,000 years. The leaflet is available from the Tolson Museum, Huddersfield and from Victoria Tower, Castle Hill, which is open at weekends during much of the year. Further details are available from the West Yorkshire Geology Trust site.