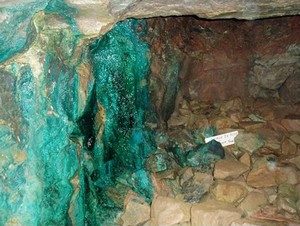 It isn’t often that a field trip starts off by meeting at a wizard’s place and perhaps we had to expect the unexpected on this visit. We arranged to meet our leader from the Derbyshire Caving Club (DCC) in the Wizard tea shop. The first surprise was the DCC museum in the back of the tea shop together with its own mine shaft. The museum was very informative and illustrated the unusual geology and mineralisation in this area. Our visit initially involved a walk and talk on the surface geology of the edge. The edge is a horst flanked by 2 key faults made up of Triassic sandstones, conglomerates and clays. These were deposited in mainly arid conditions. The conglomerates represented flood events with the source material originating in Brittany. There are several theories for the mineralisation; was it present at the time of deposition (syngenetic) or was it hydrothermal (epigenetic)? The surprising variety of elements and minerals found at Alderley Edge suggests that the epigenetic theory is more favorable. A combination of saline solutions from the Cheshire basin (providing Sulphates and Chlorides), water leaching the carboniferous measures (providing the variety of metals), faults (providing the pathways) and clays / marls to provide the caps have all helped to concentrate the minerals in the sandstones. 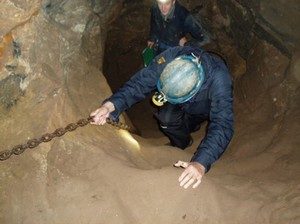 After lunch we made our way to Wood Mine. Having entered the mine we were briefed on how the mineralisation was linked to the faults with the heavier minerals such as galena being deposited nearer the fault and copper minerals being lighter were transported further in the porous sandstone. The talk cleverly linked the surface geology to the sub surface. The final surprise was discovering that we could limbo through the tighter passages in the mine – I’m sure the Wizard had cast a spell on us to achieve this feat.