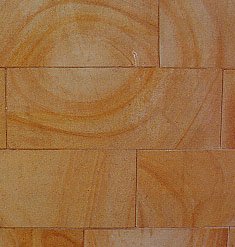 The coarsest sedimerits were deposited in n the channels of the fastest flowing rivers while finer sediments, after prolonged sorting, settled on the river banks and the delta front. The finest clay particles, carried in suspension by the rivers, were either washed overbank or taken out to the sea to settle slowly. Each thin bed of clay became black or grey shale, after burial by later deposits. The beds are so fine that the bedding is described as laminated. Clay minerals are rich in iron at some horizons, so the black or dark grey shales often have a brown or yellow colouration when exposed to weathering at the surface. Marine animals were easily fossilised in this low energy environment where there was a lack of wave or current action. Bivalves, brachiopods and goniatites are common in the shale beds (called marine bands) where the huge numbers of fossils found must have resulted from a change in the animals’ environment at the time. Lithification takes place at depth after the sediments of sand and clay have been laid down, when the water is squeezed out by pressure from later deposits. Cracks and fractures known as joints are caused by movements and stresses within the earth’s crust. When rocks are exposed to weathering, joints at or near the surface are opened up. Shales are fissile, which means they split easily along their bedding planes and often crumble when the joints are close together. Massive sandstones are particularly resistant to weathering and often form scars and cliff features called edges in the district. Sandstones vary in colour from pale grey Huddersfield White Rock to the rich orange of the Readycon Dean and the Rough Rock sandstones, the latter to be found in Beaumont Park and Longwood Edge.Liesegang Rings This colouration and staining results from iron in the shales moving in solution during burial and compaction of the sediments. The joints and bedding planes within the sandstones provide an easy route for the iron solutions to move. This may then be deposited as brown iron staining (Liesegang Rings), which can readily be seen on the freshly quarried stone and on flags made of Greenmoor Rock in St. George’s Square, Huddersfield. 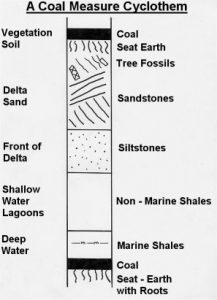 repeated many times. These cycles of strata deposition are called cyclothems and reflect the changing environment of deposition, from marine shale followed by non-marine floodplain and deltaic shales and sandstones and finally seat-earth and coal, after which marine transgression started the cycle again. Cyclothems vary in thickness, suggesting that subsidence of the basis was local and perhaps irregular. One scenario put forward by geologists is that the area south of the northern landmass was a basin which was slowly subsiding due to the overlying weight and compaction of the new sediments being laid down. It is likely that the water was never deep in many parts of the delta system, with the depositional surface fluctuating around sea level. At times the sea encroached onto the land as a marine transgression and the sedimentation cycle began again. At other times, the delta built up sufficiently above sea level and remained there long enough for forests to grow and provide material for future seams of coal. Abundant plant material falling onto waterlogged ground decomposed slowly allowing swamp peat to accumulate. The peat then compressed at depth over millions of years. Carbon became concentrated, as water and gases were driven off by higher temperatures and pressures and coal was formed. Other examples of marine transgressions are associated with worldwide rising sea levels. These were probably due to the forming and melting of ice sheets which developed over the southern polar landmass at this time. Melting of the ice sheets made sea level rise, causing a transgression. It then fell again as ice sheets built up during colder periods. In the Carboniferous strata of Northern Europe, the fossil record reflects these changing environmental conditions. For more information about the Rocks and Landscapes of Huddersfield see our other pages on Local Geology and our guide to the Geology of Huddersfield